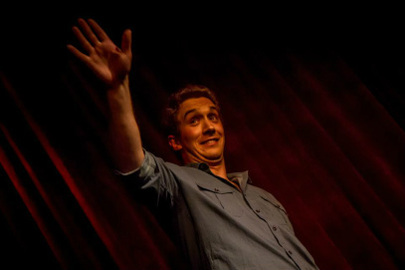 Changing  Jennifers was created by Dan and Eden. Prior to this Dan, Eden and Eugene, playing as The Dick Van Dykes, competed in and won numerous TheatreSports competitions. This inspired them to start a troupe of their own so they could explore other aspects of improvisation. Now, the Jennifers perform a variety of shows predominantly aimed at an adult audience.
DAN
Dan is a highly-skilled mechanic and has an amazing talent for making impressive machinery. Hannibal once said to Dan "With a pair of pliers and a little time, you could fix anything but dinner". He is also an excellent fighter and is invaluable in hand-to-hand combat. Dan never touches alcohol, preferring milk instead. He suffers an intense fear of flying.

EDEN
Eden is a Flinders Drama Centre graduate. He has been involved with South Australian improvisation troupes for many years and is co-founder of Changing Jennifers, for whom he is one of the primary players. Eden has represented South Australia in two National TheatreSports Competitions and he runs numerous improvisation workshops.

SAM
When he writes his bio, we'll put it up. Until then, please enjoy some Melville. Some years ago - never mind how long precisely - having little or no money in my purse, and  nothing particular to interest me on shore, I thought I would sail about a little and see the watery part of  the world. It is a way I have of driving off the spleen and regulating the circulation.

WILL
A novelist, short story writer, and journalist. His economical and understated style have had a strong influence on 20th-century fiction, while his life of adventure and his public image has influenced generations.

All of the photos on this website were taken by Louise Myers Photography and Calen Vanstone.
Changing Jennifers is a proud member of Improv Adelaide.
Powered by